“I think the whole experience will make me a better footballer,” a then 12-year-old academy player from Chelsea told the Premier League’s official website, when featuring in their Christmas Truce International Tournament at the end of 2014. Having beaten Paris St Germain 1-0 in the final, Blues defender Valentino Livramento (photo) picked up international experience at U-12 level already and reflected on it in a diary. The now 17-year-old right-back is in his ninth year at Chelsea’s academy after signing for the club as an Under-9 and made his UEFA Youth League debut last season – a development that many of his followers already anticipated five years ago.

“He’s been part of a very successful generation of players, mostly 2003-born (he’s a late 2002), that have produced a lot of success over the years,” ChelseaYouth, who follows the Blues’ youngsters closely for many years, says and confirms the picture one would get of him when reading his diary in 2014: “He’s a well-liked player for club and country. (…) He’s not a loud and in-your-face leader but he holds himself and everyone to high standards and drives the team forward with his style.”

The Croyden-born teenager, who is of Italian heritage, represented England on youth level, most recently making his debut for the Three Lions’ U-19 team in a 4-0 win over Luxembourg, where he was a late call-up in place of fellow Blue Henry Lawrence (19). “He comes across as a focused and dedicated professional, who knows where he wants to go and how to get there,” ChelseaYouth continues on Livramento, who signed his first professional contract with Chelsea in November.

Livramento is the next full back off the production line, a force of nature, boundless energy and end product, and so decisive with it. People have seen more of Lawrence this season due to his Dev Squad apps, he can play just about anywhere and be bang on when doing it. Machine.

The young Londoner is a very well-rounded player already, as ChelseaYouth explains: “He’s a versatile right-sided player who does his best work at full-back or wing-back. He has a tremendous engine, great anticipation and understanding of how to position himself against an opponent one-on-one, and then a range of ways to beat them.” For his young age, Livramento already comes across very mature. “He plays with a real maturity for someone who’s only just turned 17 and gives an air of accomplishment in everything he does,” ChelseaYouth, who does not see a major weakness in Livramento’s skillset, continues. “If he has a weakness, it’s perhaps only in terms of experience and maybe some slight injury concerns – hopefully those disappear as he gets older – because for his position and age, he ticks most boxes.” 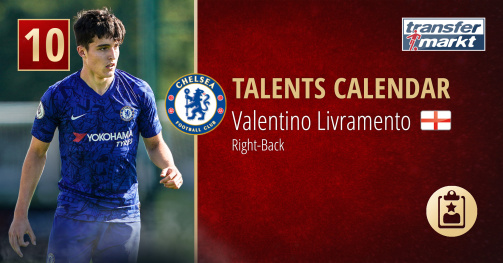 An injury also kept him out of the European Under-17 Championships this year – a temporary setback for the player, whose style is different from fellow right-backs Reece James (20) and Dujon Sterling (20/currently on loan at Wigan). “If all of them realise their potential, Chelsea have a rich man’s problem,” Chelsea Youth explains. “If he’s good enough when the time comes, he’ll get his opportunities to play.” Just like Sterling this season, James went out on loan to Wigan last campaign, making 45 appearances in the Championship – a move that helped him to make the step to the Premier League this term.

Bakayoko, Moses & Co.These Chelsea players are currently out on loanOverviewLivramento could benefit from a loan-move as well, although ChelseaYouth sees him as “still a bit young to be thinking about that right now”. In two years, he could follow in James’ and Sterling’s footsteps, however. “The earliest I expect he’ll go is the season he turns 19, so 2021/22, and his quality will determine where he goes. Chelsea try to go as high as possible and favour the Championship in England for the 46+ game season.” If it is down to ChelseaYouth, Livramento will “hopefully be in a position to challenge for serious top-level minutes” in two or three years. “Whether that’s at Chelsea would depend on who the manager is, but he’s in the right place at the right time as things stand, so the door is his to open.”

The talent for a successful career is there and Livramento has the potential to become an asset on the right for club and country. So, is there a senior player, his style compares to? “I don’t like to make comparisons unless they jump out at me fairly obviously,” ChelseaYouth says. “But maybe some Cafú? He’s up and down the right side like a train all game long.” If he stays free of injuries and continues to work hard, all chances are there for the 17-year-old to make a career for Chelsea and England.

Valentino Livramento: Chelsea’s rich-man’s problem to follow in the footsteps of James & Co.